‘Cooks on Main’ is a true SBA 504 success story

Now here is one of those stories that make the work of the Lewis & Clark Development Group so gratifying.

Gourmet Insider Magazine, the leading trade magazine in the houseware industry, has named Williston’s Cooks on Main a 2018 distinguished “All Star” retailer. The store and its owner, Angela Skogen, are currently featured in the July/August issue.

Founded in 2010, Cooks on Main is a specialty kitchen store located on Main Street in Williston.

The store sells top-quality housewares, kitchenware, and gourmet foods. It rightly markets itself as the culinary destination for the region offering something for everybody from the seasoned chef to the novice beginner. In the last eight years, the store has become a destination and developed a loyal and growing clientele. 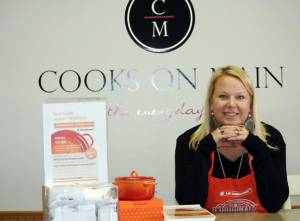 Originally, Cooks on Main had 2,450 square footage of main floor retail space which included a kitchen for the cooking classes. The business was soon overflowing with product crammed into the limited space, forcing Skogen to turn away people who wanted to take cooking lessons.

The only option for Skogen was to renovate the building’s second floor and expand the retail space into the area but it came with a number of challenges that included restrictions on what type of renovations could be done due to Renaissance zoning and costly improvements to comply with the Americans with Disabilities Act (ADA). This was determined to be too costly and not feasible.

Skogen was later approached by a neighbor asking whether she might be interested in purchasing the building next door. Once it was determined that the two buildings could be combined through a walkway on the main floor and the purchase and renovations were financially possible, a purchase agreement was signed. But that purchase was made possible by the Lewis & Clark Development Group.

Though the SBA 504 program, LCD Group funded  the purchase of the building next door, renovation of both buildings, equipment purchases, and refinance of a portion of existing debt on the project.

The SBA 504 loan allowed Cooks on Main to keep its retail and classroom space entirely on the main floor. The second level is mixed use with office space and residential apartments. And the lower level provides storage and a loading and shipping area.

LCD Group congratulates Angela Skogen on her remarkable success. We take pride in knowing that we played a role in helping her grow her business.