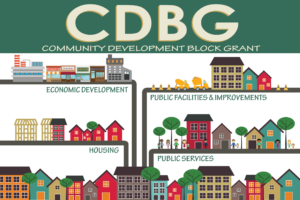 The committee ended up approving eight applications, allocating more than $500,000 for projects.

“We try to anticipate requests ahead of time but each year is different,” notes Lyle Hogue, LCD Group community development director.

Housing Rehab Projects: Butte and New Leipzig applied to rehabilitate multi-family complexes in their respective communities. In both cases, the cities plan to make sidewalk repairs and ADA upgrades to bathrooms.

Public Facility Improvements: Improving city water systems made up the bulk of public facilities applications. The city of Carson submitted two applications for funds to make repairs to the community’s water tower and for water lines. Glen Ullin applied for funds for city water lines. Steele requested funding for both water and sewer lines. Hebron sought funds to upgrade water meters. When it came to building requests, Wing submitted an application for a new chemical feed building while Garrison applied to make ADA changes to its senior center.

Scoring, Evaluating, and Approving Applications: According to Hogue, requests for both housing rehab and the Main Street program were less than expected. This allowed the committee to fund these four projects.

However, this was not the case for applications to make improvements to public facilities. Hogue noted the total dollar amounts requested for these projects exceeded available funds. As a result, after scoring the projects, the committee was ultimately unable to fund Carson’s request for water lines, Hebron’s application for water meters, and Garrison’s ask for funds to make ADA changes to its senior center.

“Each application has merit. Ideally, we’d approve every project but the committee has to evaluate each application based on the final scores and adjust allocations according to funding availability,” noted Hogue.

About Community Development Block Grants: The CDBG program is one of the longest-running federal programs.

Provided through the U.S. Department of Housing and Urban Development (HUD), the program funds local community development activities with a stated goal of providing affordable housing, anti-poverty programs, and infrastructure development. In contrast to categorical grants which are made for specific purposes, CDBG are largely used at the discretion of state and local governments and their sub-grantees.

Click here for more information about the CDBG program or contact Lyle Hogue at (701) 667-7623 or at lyle@lcdgroup.org.

Final Rankings: Below is a breakdown of the final scores and funding for each applicant. Projects are listed in order from highest to lowest score.