The Lewis & Clark Development Group has been funding projects in North Dakota since 1969. This year, they recevied $300,000 to use toward community development financing. 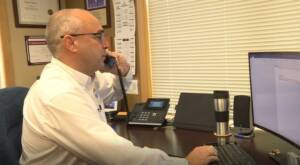 The development group works to provide programs and loans to support businesses, local governments, and individuals across North Dakota.

Sammi Wu, the owner of Culver’s, is one of those that Lewis and Clark has helped. Wu has lived in Mandan since 1998 and says finding a good place to eat was always a struggle.

“With Lewis and Clark, they helped quite a bit of small businesses set up. So, actually, we have more places to go to.. either dining or to shop at,” Wu explains.

Wu says when it came to starting her own Culver’s restaurant, Lewis and Clark Development Group made all the difference. She says they not only lent her the money to get started, but also took the time to instruct her on the steps she needed to get started. She now employs nearly 45 people.

“I kind of get, like, a feeling that I’m doing something good for the community. You know, people come here, and you know, they have a good experience dining in… and I do whatever I can to make it good for them,” says Lindsey Honeyman, a Manager at Culver’s.

In 2018, the Lewis and Clark Development Group helped 23 businesses in total, lending over $6 million. At the start of 2019, the Group received $300,000 dollars to go toward community development projects, another aspect of what they do.

Brent Ekstrom, Executive Director at Lewis and Clark, says these funds will will help defray the cost of taxes for locals.

He says they will work with that person to utilize programs to help them finance what they need.

The Lewis and Clark Development Group is Celebrating their 50th anniversary on June 27th with an open house from 3 to 6 p.m. Ekstrom says there will be hotdogs and fun activities.