(Credit: Sam Nelson, Bismarck Tribune) — A North Dakota nonprofit group is adding affordable housing in Bismarck, with the first of the new units to be ready in the spring. 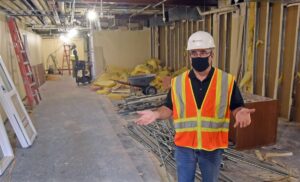 Mandan-based Lewis and Clark Development Group, a collaboration of three nonprofits, is renovating buildings on the former Ruth Meiers Hospitality House grounds to provide a total of 120 units of affordable housing. The group is adding 35 units and remodeling another 40.

The Ruth Meiers nonprofit abruptly ended operations in 2019, and the now-dissolving Lutheran Social Services planned to take over the Boulevard Avenue building in conjunction with CommunityWorks North Dakota, LCD Group’s legal entity. LCD Group Executive Director Brent Ekstrom said Lutheran Social Services backed out of the agreement at the beginning of 2020, and Lewis and Clark Development purchased the building in November from Choice Bank, which had taken ownership after Ruth Meiers shuttered.

LCD Group went ahead with the project without Lutheran Social Services because it is an opportunity to provide affordable housing to Bismarck, which is part of the group’s mission, Ekstrom said.

The total Boulevard Apartments project cost comes in around $16 million, with construction accounting for $7 million, Ekstrom said. It’s funded by a combination of programs, including a low income housing tax credit, and funding from the North Dakota Housing Finance Agency and the U.S. Department of Housing and Urban Development. 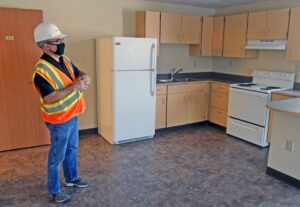 Renovation work began in December. The studio, one-bedroom, two-bedroom and three-bedroom apartments will be ready for renters in batches starting in late spring and in the fall. The renovations should be finished by the end of the year, Ekstrom said. Rent starts at $615 for a studio apartment and goes up to $1,028 for a three-bedroom unit.

The number of people in a family and the level of income help determine rent. LCD Group’s goal is to make sure no one is paying more than 30% of their income in rent, Ekstrom said.

Part of the plan includes transforming a chapel space into two separate apartments, adding two community rooms for residents to use for birthday parties or larger gatherings, and turning one of the parking lots into green space.

“We’re hoping by doing that we increase the aesthetic of the property,” Ekstrom said. “We want it to be nice.”

The building’s exterior is in good shape, but the interior needs work, Ekstrom said. LCD Group is putting in all new electrical, plumbing, and heating and cooling systems.

Demand for affordable housing in Bismarck is high, especially for families, according to Ekstrom.

“When a unit goes empty, it does not take long to fill that unit,” he said.

The Boulevard Apartments will have six three-bedroom units, which Ekstrom said are hard to find in the affordable housing market.