The North Dakota Opportunity Fund (NDOF) recently approved and funded a loan for the purchase and construction of a new location for DaWise-Perry Funeral Services. 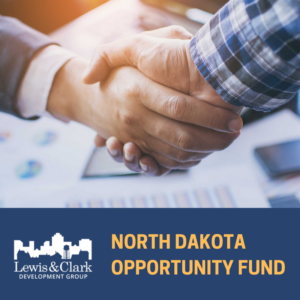 Increasing demand for cremation services, coupled with the growth in what was once viewed as non-traditional funeral services, were leading factors in the construction of the new building.

Owner David Wise credits Lewis & Clark Development Group and the Mandan City Commission with allowing him to stay in Mandan and build a funeral home he admits exceeded his initial expectations.

Lewis & Clark Development Group worked with Wise’s lender, Starion Bank of Mandan, in providing the NDOF loan, which was used for the Local Community Match for the Flex PACE Interest Buydown Program. The IRP MandanII Fund, a regional lending program, was also used to help pay for a portion of the construction.

“I found so many advantages working with Lewis and Clark Development Group. They were able to put together a package I did not know was possible,” says Wise who specifically credits the Flex PACE buydown program for allowing him to build big.

“The Flex PACE buydown program was critical. I was able to build a larger facility than I initially envisioned because of that very program. Without it, I would not have been able to expand the business the way I did.”

Moving the funeral home was also a necessity with the age of the building and in order to comply with Mandan city ordinances for crematoriums to be located in industrial zones. At first, Wise was not happy with his limited options for available space for a crematory, having to relocate but he realized the former location was no longer practical. He also admits his new location was, at first glance, not his first choice. Wise has since completely changed his view and is thankful.

“The new lot gave me the space I needed and the funding programs made it possible to build as large as I did. I now have a building where I can expand my services and it’s located in an area where Mandan is growing into. This would not have been possible without Lewis and Clark, and the City of Mandan. I’m very grateful for all they’ve done for me.”

“The North Dakota Opportunity Fund loan for the local match of the Flex PACE interest buydown helps provide small businesses a needed savings in the interest rates for the first years of expansion projects,” Burthold observes. “As DaWise-Perry is in Mandan, we were also able to use the IRPMandanII Fund to provide an additional funding cushion for the project. These programs are just two of the resources we have in our tool chest for small businesses.”

Want to know what else is available in LCD Group’s small business tool box? Learn more here or contact Matt Burthold at (701) 667-7601 or at matt@lcdgroup.org.