Never underestimate the impact of a mother’s love and determination

By the time Abigail “Abby” Pogatshnik was just 4 years old, she already had lived in several homes in and around Bismarck, North Dakota. Her mother, Lisa, divorced Abby’s father when Abby was just 10 months old. Though she escaped an abusive marriage, Lisa found herself in a new struggle — being a single mom with three young daughters to support. 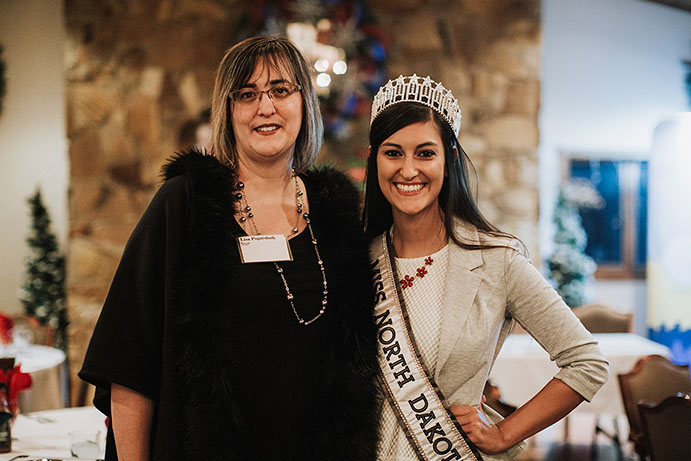 “After health insurance and day care [expenses], I had $200 to my name. So, eventually, I filed for bankruptcy and applied for some assistance,” says the elder Pogatshnik.

Needing to provide stability and a home for her daughters, Lisa worked two jobs while completing her college degree so that she could afford a home.

“We moved five times in four years. Being able to get into an affordable home created the stability needed for my children to flourish,” she says.

It’s More than a Job – It’s a Passion
It also fuels the passion for her work at CommunityWorks North Dakota (CWND), which she joined in 2012 as a mortgage processor. She is now the group’s housing director.

“I walked by the [CommunityWorks] office everyday on my way to work at the bank across the street,” Lisa says. “I thought, ‘They are so friendly; I would like to work there.’ The processor position was advertised, and I applied since it was the same position I had at the bank. I actually took a pay cut to come to work at CWND because I believed in their mission and wanted to help others secure safe, affordable housing.”

As part of CWND, Lisa understands the needs of the residents she is helping.

“I had a chance to get into a house that was affordable and put down roots for my girls. I like to think that is part of the reason Abby has been so successful,” Lisa says.

“When we moved into our home, it was nice to have that stability, to have a house and not have to wonder when we would be moving again,” explains Abby, who is the youngest of the three siblings. “From watching other kids my age who moved from home to home and who had a hard time in school, they didn’t seem to have as much ability to overcome challenges. It is hard when you don’t really know where you are going to live or sleep at night, and it takes a toll on someone who is so young.”

A Loving Mother and a Stable Home Made All the Difference
A hostile school environment also took its toll. Abby frequently was bullied, which added to her sense of insecurity.

In the eighth grade, Abby joined Students Against Destructive Decisions (SADD). With SADD, she found a safe place to be herself and was able to start the healing process from all the damage that bullies had inflicted on her since she was 8 years old. Abby was appointed to the Northern Lights SADD’s student board during her junior year, and was named Northern Lights SADD’s student of the year at the end of her junior year even though her high school didn’t have a SADD chapter. She was able to stay involved with SADD by going to another area high school’s meetings, ultimately helping to restart the SADD chapter at her school during her senior year.

Abby and her two sisters graduated high school and attended college. Abby credits a stable home environment and SADD with providing her with the resilience to succeed and eventually to become Miss North Dakota USA 2018.

A fourth-generation North Dakotan, Abby hopes to use her title to promote her platform of anti-bullying and positive self-image. She currently is pursuing undergraduate studies at the University of North Dakota in psychology and pre-medicine. Her goal is to obtain a medical degree and become a surgeon. Abby also wants to help people in other ways.

“After being involved with different organizations and seeing people’s struggles… I would love to do research in psychology to see why we are seeing higher rates of suicide in young people and learn what we can do to change that,” she says.

Note: This article was written and distributed nationally by NeighborWorks America.