The Report shows that total household debt increased by $286 billion (1.9%) to $15.24 trillion in the third quarter of 2021. The total debt balance is now $1.1 trillion higher than at the end of 2019. It is also $890 billion higher than in Q3 2020, and $2.57 trillion higher, in nominal terms, than the $12.68 trillion peak seen in 2008. The Report is based on data from the New York Fed’s Consumer Credit Panel, a nationally representative random sample of individual- and household-level debt and credit records drawn from anonymized Equifax credit data. 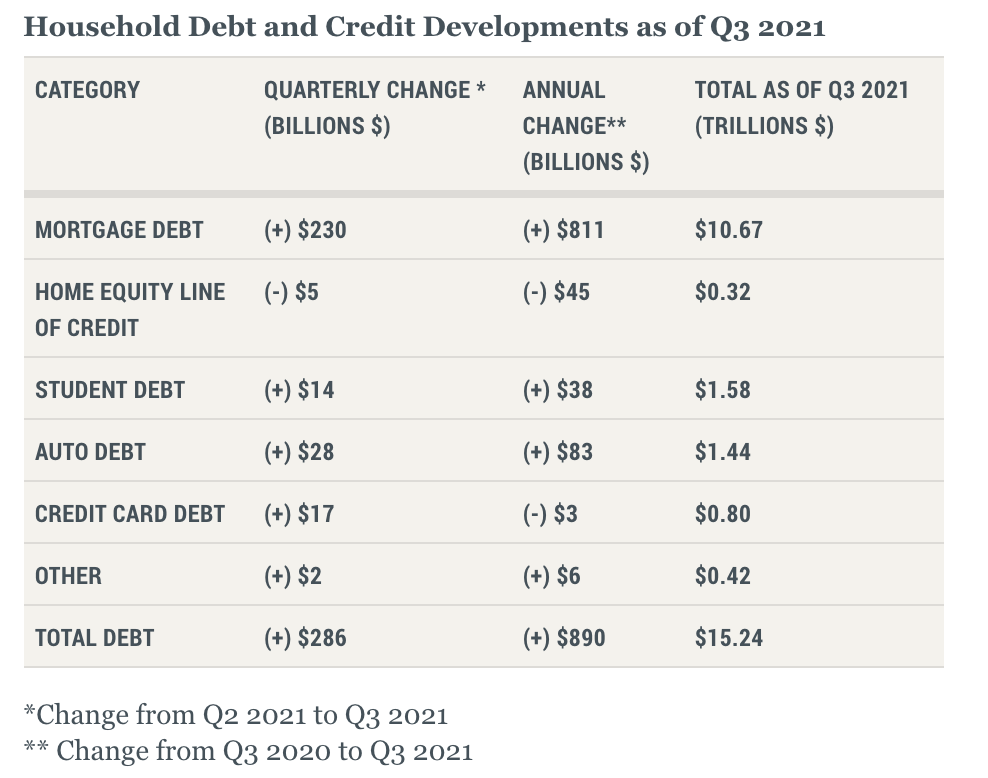 Mortgage balances—the largest component of household debt—rose by $230 billion and stood at $10.67 trillion at the end of September. Credit card balances increased by $17 billion, the same size increase as in the second quarter. Despite the increase, credit card balances remain $123 billion lower than they had been at the end of 2019. Auto loan balances increased by $28 billion in the third quarter. Student loan balances grew by $14 billion, coinciding with the academic borrowing year. In total, non-housing balances grew by $61 billion, with gains across all debt types.

New extensions of installment credit remained near series highs for both mortgages and auto loans. Mortgage originations, which include mortgage refinances, stood at $1.1 trillion, declining slightly from the series high of $1.2 trillion reached in the second quarter of 2021. The volume of newly originated auto loans, which includes leases, was $199 billion, declining slightly from the second quarter’s series high of $202 billion. Aggregate limits on credit card accounts now stand at $3.96 trillion, increasing by $88 billion in the third quarter and reversing the decline seen in the first three quarters of the pandemic recession.

“We are again seeing credit card balances increase in the third quarter after a solid rise in the previous,” said Donghoon Lee, research officer at the New York Fed. “As pandemic relief efforts wind down, we are beginning to see the reversal of some of the credit card balance trends seen during the pandemic, namely reduced consumption and the paying down of balances. At the same time, as pandemic restrictions are lifted and consumption normalizes, credit card usage and balances are resuming their pre-pandemic trends, although from lower levels.” 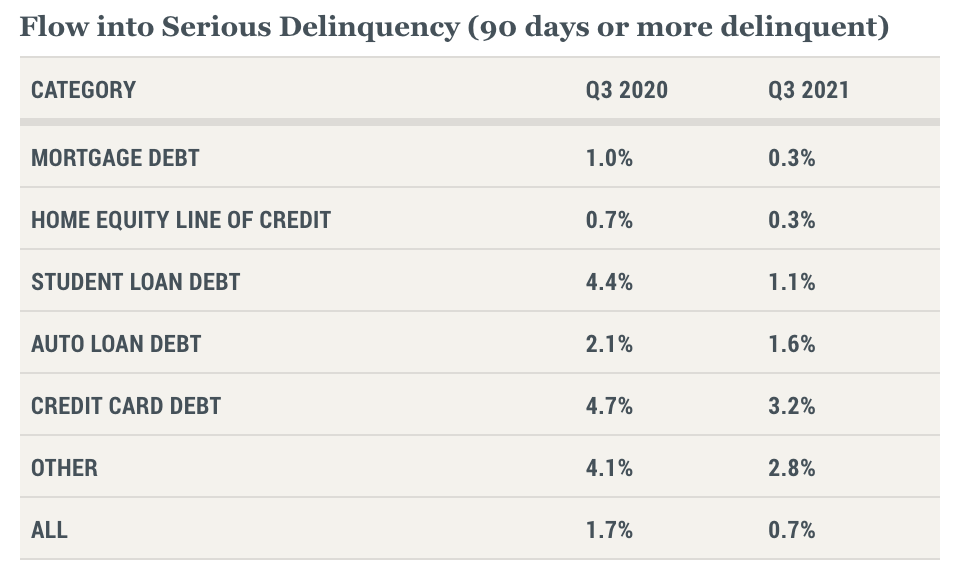 Aggregate delinquency rates across all debt products have remained low and continued to decline since the beginning of the pandemic, attributable to a large degree to CARES Act support and lender concessions. The share of mortgages that transitioned to delinquency increased slightly to 0.41% from the second quarter’s record low, as the option to enter forbearance is no longer widely available. As of late September, 2.7% of outstanding debt was in some stage of delinquency, a 2.0 percentage point decrease from the fourth quarter of 2019, just before the COVID-19 pandemic hit the United States.

The New York Fed also issued an accompanying Liberty Street Economics blog post that further examines credit card trends, including credit scores and balances. The blog takes a detailed look at increases in credit issuance and limits, and at which borrowers are being approved for credit in recent months, amid recovering consumption.

More information on the report, including methodology, may be found here.