“We could not walk away. So we found a way.” 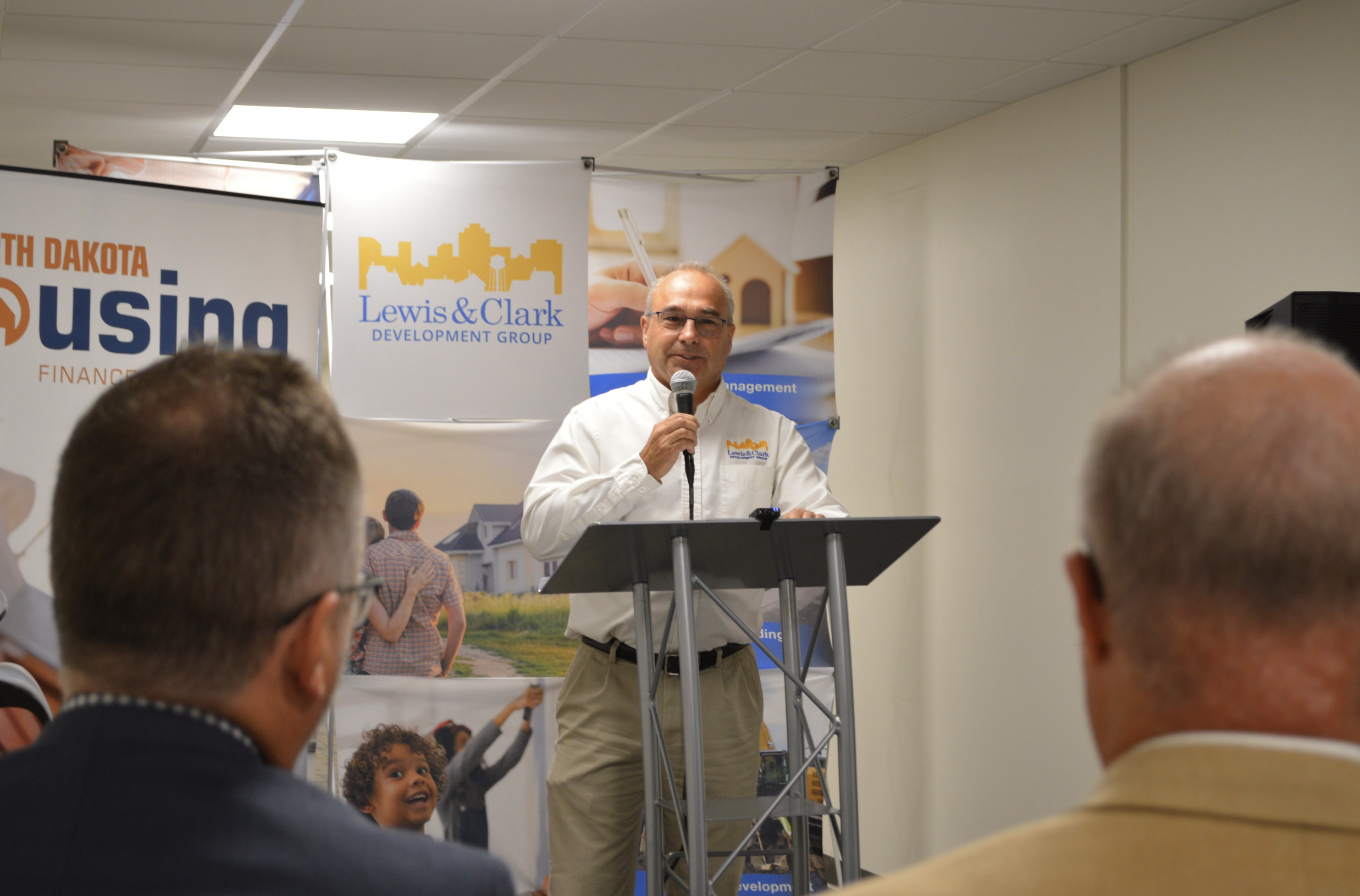 September 26 was a big day as Lewis & Clark Development Group, along with Syringa Property Management and the North Dakota Housing Finance Agency (NDHFA), marked the completion of the new Boulevard Avenue Apartments.

Since late 2020, LCD Group has been spearheading the transformation of the location from the one-time nursing home and senior living campus, into a building offering 120 units of affordable rental housing.

LCD Group “Went All In”

Ruth Meiers Hospitality House acquired the property in 2013 and partially renovated the main building but struggled with operations and it was foreclosed upon in 2019.

LCD Group stepped up to transform the property into a long-term solution to the Bismarck-Mandan area’s affordable housing problem.

An original partnership with Lutheran Social Services Housing (LSSH) fell through when that organization closed its doors in 2020. 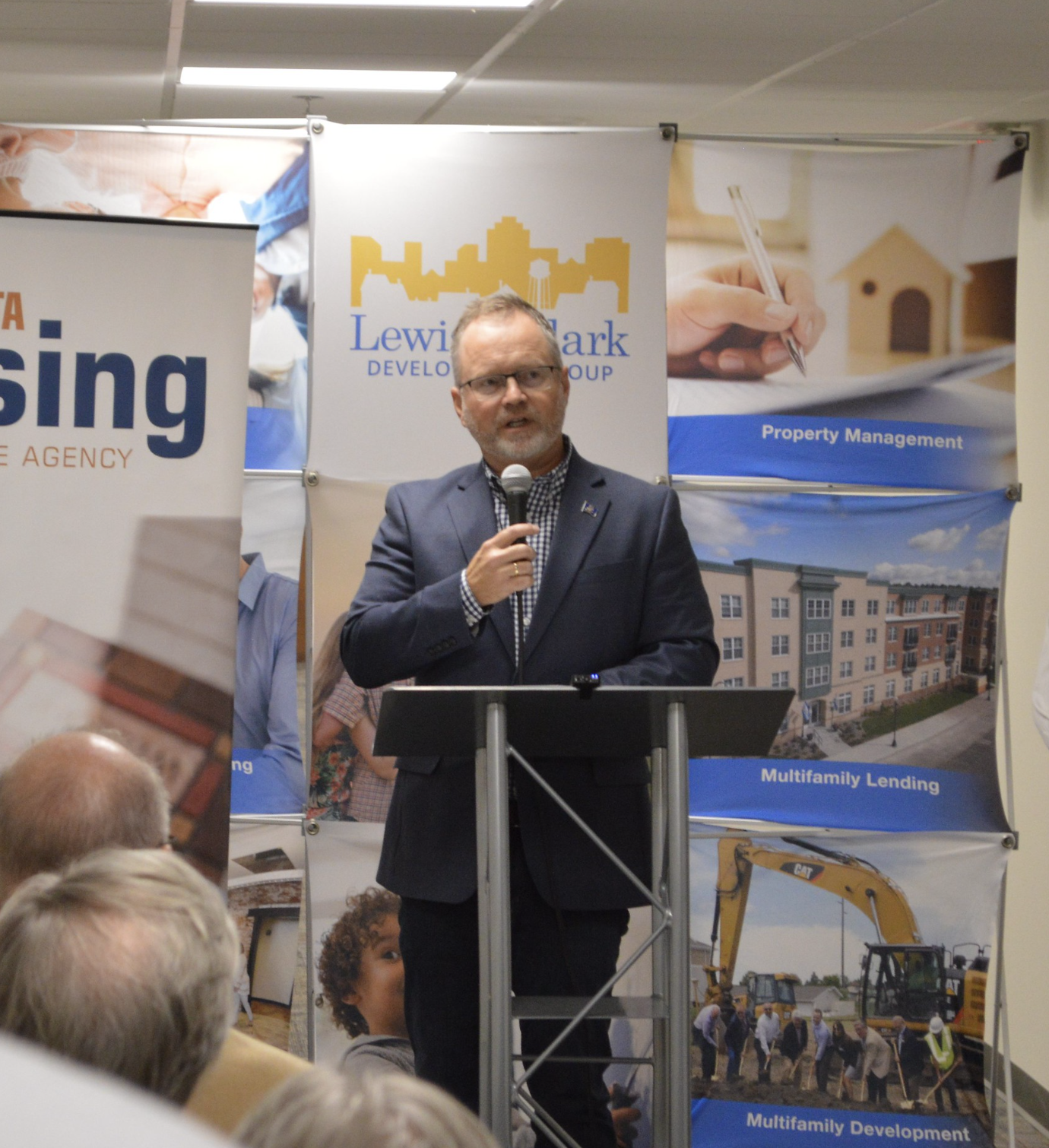 “Once LSS Housing collapsed, we were left with a major decision,” said Ekstrom. “The easy thing would have been to cut our losses and move on but because of the affordability challenge, we went all in. Community development and affordable housing are central to our mission at Lewis and Clark Development Group. We could not walk away. So we found a way.”

In November 2020, LCD Group purchased the property outright from Choice Bank, which had taken ownership after Ruth Meiers’ shutdown, with the goals of completing the rehabilitation, making the property a more attractive rental option, and ensuring its long-term viability.

What LCD Group Did: LCD Group’s scope of work included finishing projects that were not completed during the previous rehab, creating new front entrances, landscaping, better lighting in common areas, improving the flow of the main building, and converting unused areas of the main building’s first floor into 35 new housing units, which includes some three-bedroom units.

As part of the acquisition and restructuring of the property’s financial package, the affordability of the project was increased through a reduction in rents combined with providing income-qualified tenants with rental assistance.

Public-Private Partnership Made the Critical Difference

Located at 1100 East Boulevard Avenue, Boulevard Avenue Apartments consists of a main, three-story building connected via a walkway to a smaller two-story building referred to as the Porter Building. That section of the complex will offer one-bedroom and efficiency apartments with outside entrances. Ekstrom says completion on these units is expected by the end of October. 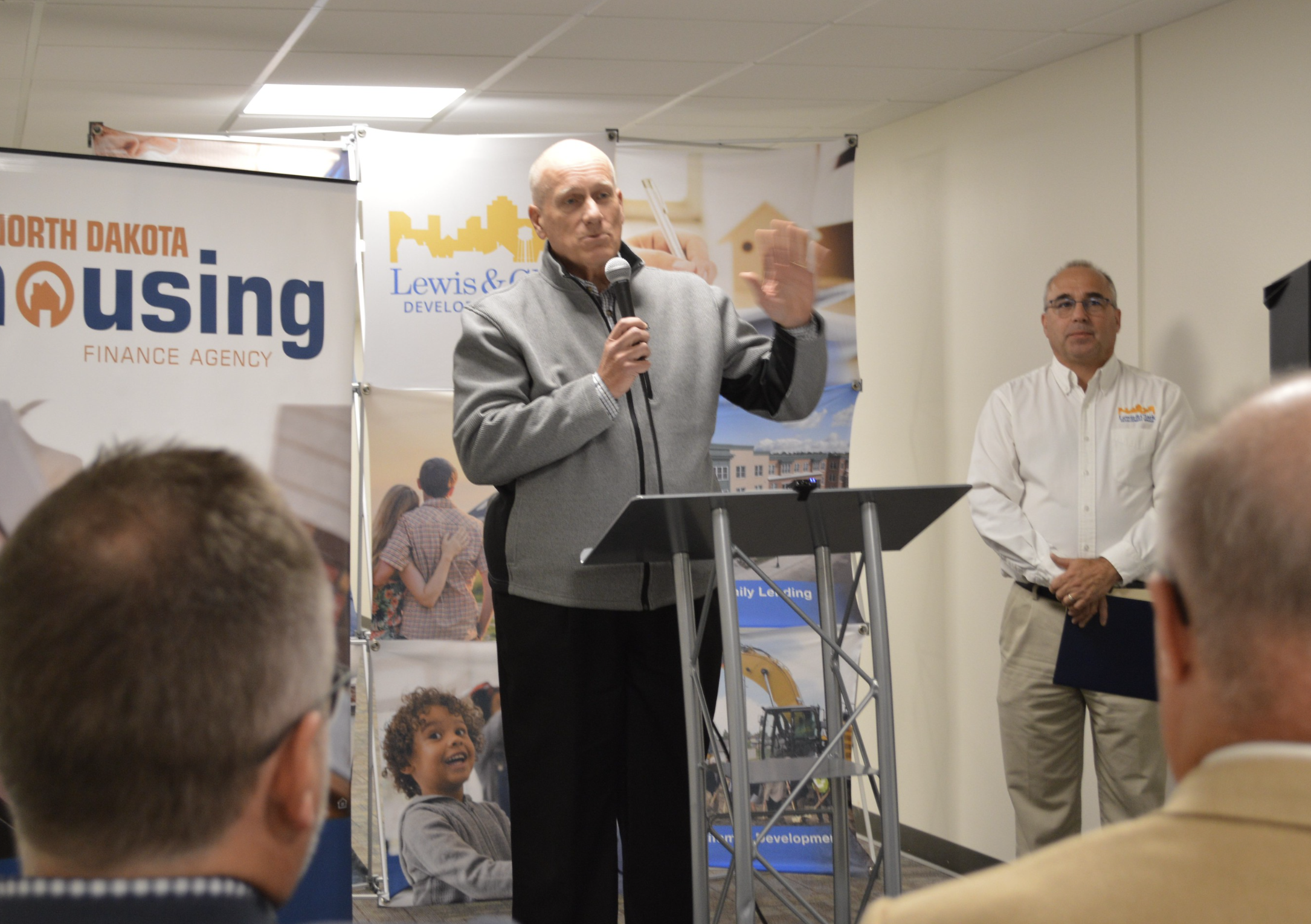 A self-supporting state agency, overseen by the North Dakota Industrial Commission, NDHFA finances the creation and rehabilitation of affordable housing across North Dakota.

Tax Credits and HIF Key to Success: NDHFA supported the redevelopment by issuing multifamily housing bonds that provided $8.58 million in construction financing, awarded $442,348 in federal tax credits through the Low Income Housing Tax Credit program which generated roughly $3.85 million in project equity, and provided LCD Group with an additional $800,500 through the state’s Housing Incentive Fund (HIF). The developer also assumed a $2.855 million HIF loan provided by NDHFA when the property was converted into affordable housing by Ruth Meiers.

Additional Financing: Additional project financing was provided by the North Dakota Department of Commerce, $866,866 through the federal Neighborhood Stabilization Program; $689,650 award from the City of Bismarck through the federal HOME Investment Partnerships program; a $560,000 loan from CommunityWorks North Dakota (which is part of LCD Group), and $50,000 grant from NeighborWorks America.

The project’s permanent financing was provided by PNC, a roughly $6.1 million loan that is insured by Freddie Mac. The total cost of the acquisition and rehabilitation of the property by LCD Group was $16.5 million. 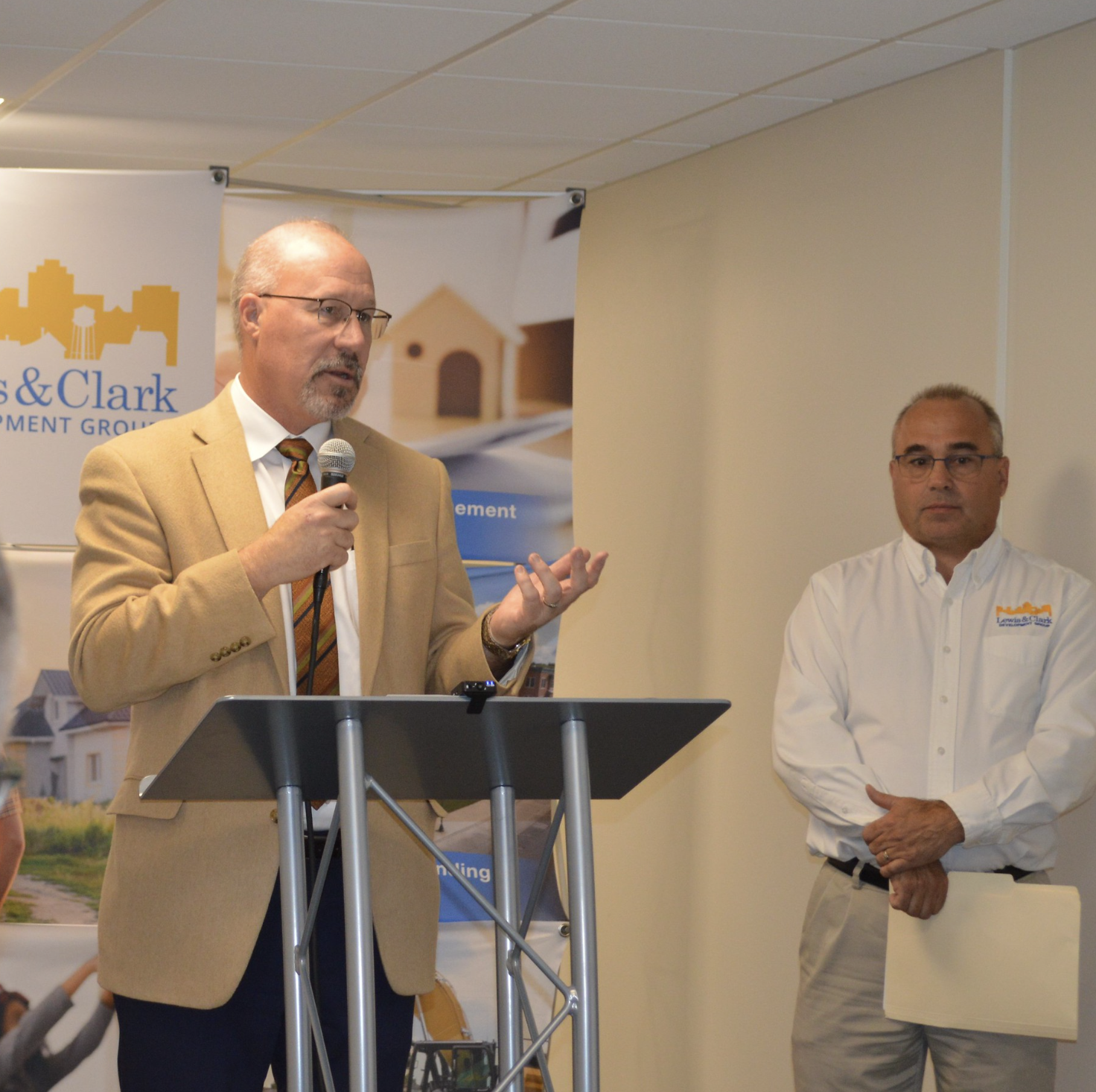 In his brief remarks, Sanford highlighted the critical role the state’s HIF program played in making the project a reality, speaking of how affordable housing is critical to the state’s economic well-being.

Representatives with the Bismarck Mandan Chamber EDC were also on hand to mark the completion with a ribbon-cutting ceremony.

But perhaps the most memorable remarks came from tenant Twila Herald. A single mother, Herald said her family now has a safe and secure place to call home.

“We love it here. The location is perfect. We are close to downtown and we take in many festivities. We feel safe and my children are happy here,” said Herald.

Ekstrom stated Herald’s testimonial illustrates why LCD Group and its partners worked to transform the complex into Boulevard Avenue Apartments. 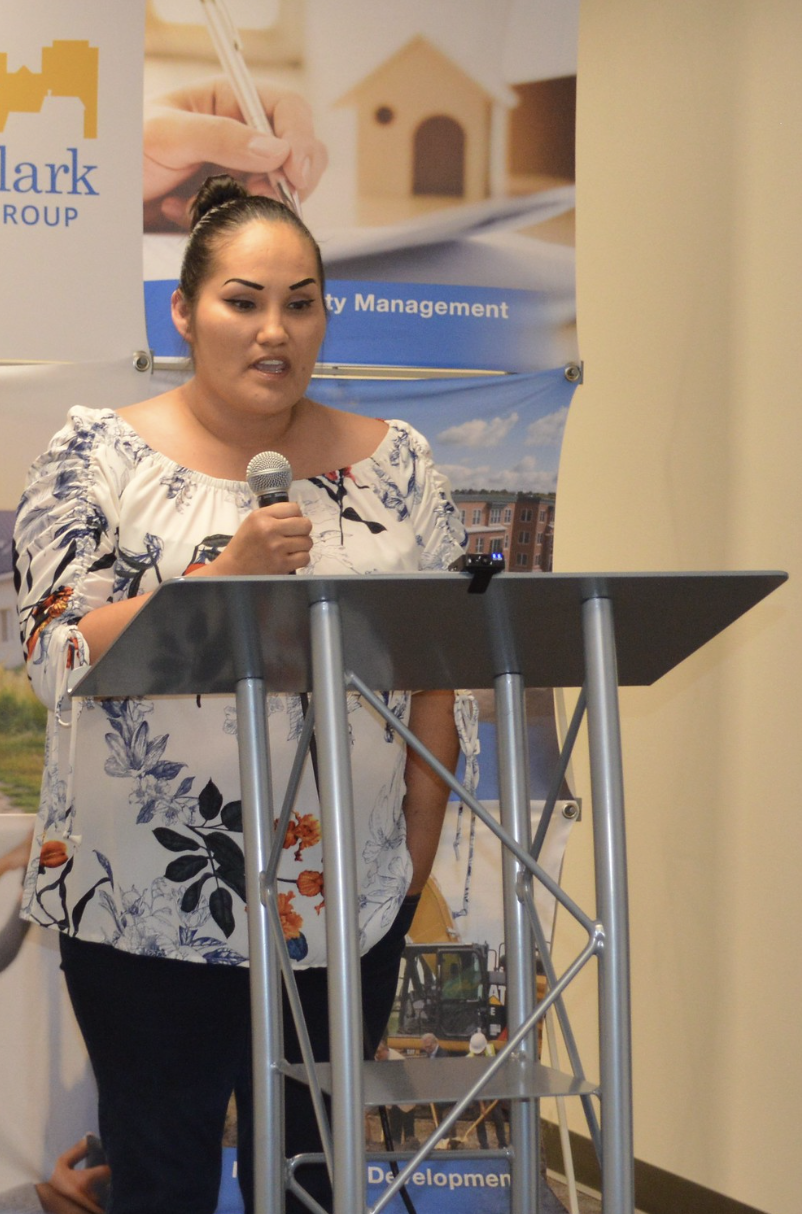 “You can put a roof over someone’s head but that doesn’t make it a home. We created something here that is providing stability for tenants like Twila and, just as importantly, for her children. Safety and stability is what you need for families to flourish and individuals to thrive,” said Ekstrom.

Now Accepting Tenants: Individuals who would like to learn more about the apartments should contact Syringa Property Management at (701) 471-3233. Information is also available online.

Timing is Perfect: According to LCD Group Executive Director Brent Ekstrom, the opening of Boulevard Avenue Apartments could not come soon enough.

“There is a significant need for affordable housing in the Bismarck-Mandan area, particularly rental housing for lower-wage workers, and demand is growing,” said Ekstrom.

“Lewis and Clark Development Group recognized how this property could help the community address this need. I’m happy we are finally at the finish line and able to celebrating Boulevard Avenue Apartment’s successful redevelopment,” Ekstrom added.